Guests Interacting With Each Other Via Social Media During A Wedding Ye Or Ne?

Chances are that at a wedding there are going to be instances where guests have an opinion about something concerning the wedding right? Well what would the vibe be like if guests were able to share opinions and interact with each other via social media during a wedding? Now right off the bat it seems like it would be a bad idea. Social media seems to be a world where people get the courage to say things they would never dream of in person. 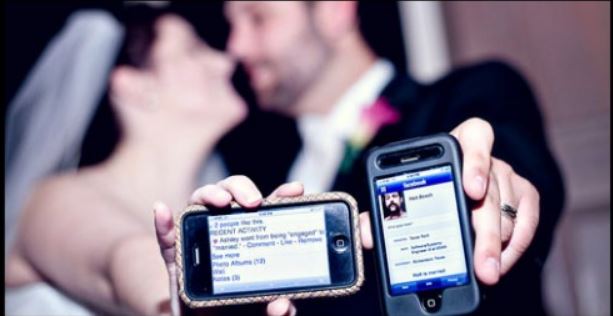 The main concern for a bridegroom is obvious in this case though. And it’s the idea that guests would be focused on something else versus being focused on the ceremony. No woman wants to feel like anything else is going to be getting the attention she deserves on this day. The key is to have ground rules of course. Take the case of Maria and Rob. Both were social media addicts who had actually met via one of the platforms. So for this couple the idea of incorporating it somehow made sense.

The idea of allowing guests to interact via their social media pages was met with concern at first, but once Maria and Rob determined that they can set some ground rules, it became a risk both were comfortable with taking. The ground rules in this case were simple enough.

The tricky part as mentioned in one of the points above is still the “when” question. How would a couple determine when they felt okay for guests to have smartphones in their hands typing in commentary via social media?  Couples that consider this need to understand they have many options in this regard in order to keep things from getting out of hand.

For instance, a bridegroom could decide to elect for only a few carefully chosen guests to have this luxury. While this may seem unfair to some, there are clearly going to be guests a couple has more of an intimate relationship with then others and a couple might prefer for only them to have the privilege to interact through social media during the wedding. All guests could still interact, just not during the wedding.

In Rob and Maria’s case they felt like allowing everyone to take part during the wedding was fair, but they really were aggressive with making sure that guests used proper etiquette. They felt like things should be done as inconspicuous as possible.

Another option for couples that don’t mind getting away from convention would be to setup a portion during the wedding solely for the purpose of social media interaction. Keep in mind that this would be through a specific account setup by the couple. Once again, the implementation of this can be tricky, but if a couple isn’t too concerned with keeping things super formal and traditional, then they can find a way to make it work.

The reality is that social media is a part of life these days. Even if a bridegroom doesn’t allow it during the actual wedding, it will still be a part of the big day in some way.  Allowing it during a wedding is just an idea, but certainly not one that any couple has to incorporate. For those couples who might though, if careful thought and planning is put into the execution of it, then it can inject an element of uniqueness into a wedding that may serve to make it even more memorable than it will already be.

Planning A Second Wedding? Here’s Some Insight To Help You Along The ...Wedding Ceremony Speeches Versus Wedding Reception Comedy Roasts
Scroll to top