What You Should Look For In A Good Marriage Celebrant

The majority of the time they’ll be observed at weddings, but they’re also able to carry out ceremonies such as the following:

Celebrants also aren’t members of the clergy such as priests would be. Priests are bound by the customs of their faith while celebrants have more versatility in terms of what they can do. They can put together a wedding according to whatever requirements a couple wants, work within various themes and different concepts.

How do you find a good one though, because not all wedding celebrants are created equal? Well there are a few general guidelines you can follow.

Getting to know you and your partner

Firstly, you don’t want someone who isn’t going to take the time to get to know not only you, but also your marriage partner. You would want them to take the time to understand your entire relationship if possible and how it arrived at the point it is now.

A good celebrant needs to be aware of the various regulations and laws concerning what they do as it relates to the country they’re in. Any resources or interjections they could add in order to help your cause would also be appreciated.

A willingness to listen

No matter how experienced a celebrant might be, you wouldn’t want them to come off like they were trying to dominate any exchange you had with them. You’d need someone who was open to listening to you and learning about any ideas you have. You’d want someone who isn’t rigid, who radiates reassurance, can relate to you in certain ways and above all else is authentic. END_OF_DOCUMENT_TOKEN_TO_BE_REPLACED

Fascinating Wedding Traditions From Around the World

There are many different wedding traditions people adhere to in the United States.
Most of these are well known. You have the bride tossing up her bouquet to a hopeful bridesmaid who believes if she catches it, then 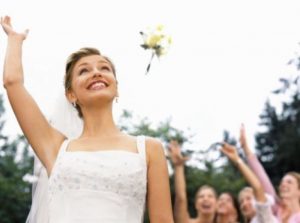 she’ll be the one to get married next.
You have the something new, borrowed and blue traditions, which is all about creating good luck.

A lot of these traditions are still used and looked at as being fun, so much so that even a lot of couples that aren’t so big on tradition will decide to engage in them.
However, Americans aren’t the only people who have wedding traditions or customs they believe are important.

Here we’re going to take a look at some wedding customs from around the world. Some of these are innocent, while others are a little confusing, others might come off as very strange.
The one thing they all share is that they mean well and serve to wish well onto the couple. So let’s get started.

Men who consider catching the women of their dreams a successful hunt might appreciate this one. In some parts of Chin the groom takes the head off of an arrow and proceeds to shoot at his bride to be numerous times. After it’s over he gathers the arrows and breaks them up while the ceremony is taking place. It’s believed that when this is done that the love will endure forever.

If you like eating chocolate and drinking champagne after your wedding reception, then you’re in luck. Oh, one thing, you have to consume it out of a toilet bowl. We don’t know if this is designed to be a glorified haze, but the belief is that it serves as a bonding experience for the couple, something to give them strength right before the wedding night.

In certain parts of French Polynesia such as the Marquesas when the wedding ceremony is over the family of the bride will lie down on the floor side-by-side. After this the bride and groom walk over them as if they were a rug.  Can you say ouch? This tradition is in good faith and is designed to offer love and support to the newly married couple. END_OF_DOCUMENT_TOKEN_TO_BE_REPLACED